In one of my previous posts, I had mentioned that the game Super Mario 3-D World is not a game I would have wanted to play. I said this mainly because of the fact that it seemed like another Nintendo sequel and the way it was advertised. I guess that I was wrong about this game. In fact, I think that is the most fun Wii U game that I have.
Let me start with the plot of the game. The story is that Bowser has kidnapped a bunch of weird fairies to do something (I have no idea what he is up to yet…). I know it sounds weird, and it is, but the game makes up for it. You can play as four different characters, Mario, Luigi, Toad, and even Peach. Each of these characters has there own special abilities. The levels are absolutely amazing compared to any of the side scrolling game I have seen. Although you could technically call this a 3-D platformer, it has more of a New Super Mario Bros. style to it as well. Anyways, the levels in this game take a unique style and make the levels a lot more fun. For example, I was not a big fan of desert levels or haunted mansions before, but this game makes those levels seem just as amazing as the others.
There are a few faults with this game that keep it from being my favorite Mario game. First of all, since the characters have their special abilities, they are not equal when it comes to using them. This meaning that some of the characters are not the most useful-ability wise. The best being Luigi in my opinion for best skill and my personally favorite character. Second, this game is actually very easy. You start out with a two-hit kill instead of one, ruining the challenge of having to earn your way back to the position of extra power. However, they add the challenge of having to collect three green stars and a stamp per level. Some of them are in places that you would never expect them to be.
In the end, I would this game is excellent and would give it a 4.5 out of 5 stars on a review. If you have a Wii U, and don’t have this game yet, I highly recommend that you get it. 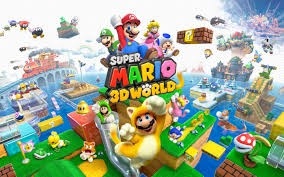 On January 20, 2014, I officially turned 13 years old. This age is one of the marking points in your life, for this age is when you can do stuff you couldn’t have done before. I no longer have to change the date of my birthday on my e-mail just so I can access it without the site bugging me about it. I no longer have to feel guilty about watching a PG-13 movie because I’m not 13. I can officially call myself a “teenager” and I can do so much more. Although this is a very phenomenal age, I have to say that I did not exactly celebrate it in a phenomenal way. My birthday party was-in a nutshell-lunch and a movie with a couple of my friends. I didn’t exactly watch a movie at a theater, though. Instead, I decided to keep it simple and rent a movie of my friends choice. I kind of liked the simple birthday party idea. But this wasn’t my first choice of a party, though. I thought about going to Main Event for the second time, but that seemed a little too childish. After all, 13 is considered to be the age of a man in some cultures. Paintball was suggested by mom, and that seemed like a good idea, but I realized a flaw for it. I’ve never tried paintball, but I have heard from people who have. From what I heard, you get huge red marks on your skin from paintballs. I didn’t know if that was really true, but I didn’t want to risk having a big red mark on my back as a birthday present. That was all my options, so I decided to keep my party nice and simple. Anyways, I hope that after the age of 13, I’ll be able to make it through the awkward stages of being a teenager. If you haven’t had your 13th birthday, then I hope you spend yours in an excellent way. I sure enjoyed mine.

Welcome to your brand new blog!

This is a sidebar and can be changed in Widgets in your dashboard.

You can also modify number of sidebars in theme options!